Today’s most efficient way of illuminating and lighting is undoubtedly LED. When compared with older lighting technologies such as Incandescent, Halogen and CFL bulbs, you will find that LED is by far the most energy saving and smart solution.

The pace at which LED technology is growing is truly incredible, although they’ve now been around for many years, today’s LED technology has completely changed lighting as we know it. We’ll be the first to admit that the process hasn’t always been consumer friendly, and we’ve compiled this guide to help you understand how any why you can benefit from making the switch.

What is an LED? 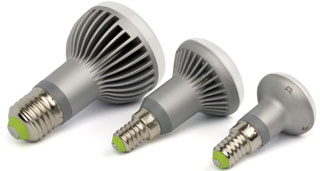 LEDs (light-emitting diodes) are a type of electronic light source. LEDs are different from conventional light sources such as incandescent and halogen lamps. They last much longer, consume far less energy and emit very little heat. They are highly durable and do not feature fragile elements such as glass tubes or filaments; they are also safer because they do not contain any mercury or lead. LED bulbs are now available in the most common light fittings, including GU10, B22, E27 and MR16.

How much power do LEDs use?

LED Bulbs use up to 90% less energy than an incandescent or halogen bulb of equivalent brightness. LEDs are far more efficient at converting electricity, measured in watts, into light, measured in lumens. As such, a typical 4 watt LED bulb can easily achieve a light output comparable to a 50 watt halogen, sometimes higher due to its high lumen to watt ratio.

How long do LEDs last?

One of the biggest benefits of using LED is its outstanding life time expectation due to very efficient thermal management, LED Bulbs are able to remove heat through heat sinks to help prolong the life expectancy of the bulb by slowing down lumen depreciation. A well-built LED with good thermal management should last up to 50,000 hours. Be wary of retailers making exaggerated claims about the life expectancy of their products.

How bright are LEDs?

The brightness of a bulb is measured in lumens (Lm), the higher the number of lumens, the brighter the bulb. Despite using very low wattages, LEDs are able to emit the same brightness as traditional light sources. To make things easier, most retailers quote an equivalent incandescent wattage so consumers can replace their lights and keep the same brightness.

You used to look for wattage when buying new light bulbs, but wattage only measures energy use. Because energy efficient bulbs use considerably fewer watts, we now use lumens, which measure brightness, to select new bulbs. The chart below can help you determine how many lumens you’ll need from your new bulbs:

How can LEDs help me save money?

Whether it’s in a standard household or a commercial environment, lighting represents as much as 20% of the overall energy consumption. By switching to LED, a considerable amount of money can be saved due to the lower wattages of the products. LEDs also last far longer so you won’t need to replace them often and their reliability means you won’t need to worry about maintenance. Once you’ve switched to LED, you will start saving money in less than a year.

Yes. Unlike CFLs (Compact Fluorescent Lamps), LEDs do not contain mercury. They also give off comparatively little heat, making them safer to handle after prolonged use. The absence of glass enclosures and fragile parts also reduces the likelihood of breakage, so you won’t have to worry about broken glass.

Why are LED lights eco-friendly?

Using LED lights cuts carbon emissions. When you replace your old incandescent or CFL bulbs with LED, you are essentially reducing harmful CO2 levels being released into the air. This is because LED lights use less energy, energy that power plants produce by burning fossil fuels and oil. The less energy that these power plants need to make through burning of fuel, the less carbon emissions are released into the environment.

LED lights do not contain harmful metals. Lead and mercury are classified as the most toxic heavy metals in the world. And halogen, incandescent, and CFLs contain these heavy metals. Discarding these bulbs elsewhere or even in landfills can cause the lead and mercury content to spill and be mixed into your source of water or as a vapour in the air you breathe. On the other hand, LEDs don’t contain any of these harmful metals.

What types of LED bulbs are there?

Thankfully, LED bulbs exist as replacements for most caps, shapes and sizes so there’s always an LED for you.

We stock LEDs in a wide range of types including standard GLS, candles, golf balls, reflectors, spotlights and tubes.

Will your LED bulbs work in my existing fittings?

Yes, all our LED bulbs are retrofit and are designed to work with existing light fittings and be used as direct replacements. Please ensure that any fittings being placed in bathrooms are both fire-rated and waterproof and hold suitable certification of IP65 or higher to comply with relevant building regulations for bathrooms.

Like most retailers, we offer both dimmable and non-dimmable LED Bulb options; you will find these on our respective product pages.

Do I need to use a special dimmer for LED dimmable bulbs?

Yes. LEDs use very little power compared to halogen bulbs. While this is good news for your electricity bills, it also means they will not work properly with your existing dimmer switches and may lead to a shortened bulb life, a lower light output and a buzzing sound. For an optimum performance, you must use trailing edge dimmers which have lower minimum loads and are designed to be used with LED bulbs.

We offer a wide range of compatible LED dimmers, which you can see here.

Do LEDs come on immediately or do they need to warm up?

What is an SMD LED?

SMDs (Surface Mounted Device) are the new generation of LED lighting, the majority of our bulbs contain SMD chips allowing our bulbs to be much brighter than older generations of LED. The LED is soldered directly onto the PCB therefore requiring less space and improves the thermal connection.

What is a COB LED?

Chip on Board (COB) is the most recent development in LED technology using chips with multiple diodes (typically 9, or more). There is no casing with COB technology which enables a much denser LED array of light compared to SMD. A consistent and controlled light beam is given off, without any visible individual light points, thus offering great optics. COB offers a greatly improved lumen per watt ratio compared with other LED technologies such as DIP and SMD. COB technology gives the best conditions for optimal cooling, which in turn will increase efficiency and lengthen the overall life of the lamp.

What colours are LED bulbs available in?

Light output is most commonly found in one of three colours: warm white, cool white and daylight. Warm white is usually used in domestic capacities and is the normal colour associated with a standard halogen bulb making the ideal replacement. Cool white is a cooler white colour often associated with fluorescent tubes in offices or retail outlets. Daylight colour is a very white light, almost with a tinge of blue to it, and provides the very best colour rendering.

Will LEDs operate outdoors or in cold temperatures?

LED are ideal for operation under cold and low outdoor temperature settings unlike CFLs. They are also extremely durable and built with sturdy components and can withstand tough conditions. Because LEDs are resistant to shock, vibrations and external impacts, they make a perfect choice for outdoor light systems.

Food photography may seem all fun and games to most people. Especially since it’s all about taking pictures of food. But, it’s not alwa...

END_OF_DOCUMENT_TOKEN_TO_BE_REPLACED

What Is The Best Type Of Light For Reading And How To Decide?

Reading is an important activity in one’s life, and if done incorrectly it can be quite harmful to the eyes in the long run. We are of ...

END_OF_DOCUMENT_TOKEN_TO_BE_REPLACED

Buying the correct light bulb isn’t always as easy as it sounds. The numbers and letters can be quite confusing if you are not an exper...

END_OF_DOCUMENT_TOKEN_TO_BE_REPLACED

Thomas Edison – His Life Story and Contributions to Humanity

When Thomas Edison's name is mentioned in any discussion, the first thing most people remember is that he's the inventor of the light b...

END_OF_DOCUMENT_TOKEN_TO_BE_REPLACED

When it comes to makeup, the light you use can be one of the primary factors that define the outcome. Bright natural light is obviously...

END_OF_DOCUMENT_TOKEN_TO_BE_REPLACED

How can I make my home or workspace feel cosier?

There are a number of aspects that can be used to personalise a space. Be it your bedroom, your office, or even a corner of your living...

END_OF_DOCUMENT_TOKEN_TO_BE_REPLACED

Should You Have Lights On During Sleeping? Is Blue Light Harmful For Your Eyes?

Just like how natural light dictates your sleeping cycles, the light inside your home also dictates your quality of sleep. Can you imag...

END_OF_DOCUMENT_TOKEN_TO_BE_REPLACED

Fall In Love With Your Lighting On Valentine’s Day

February air exudes the chills of winter, along with the love and warmth of Valentine’s Day. It is soon approaching, and the excitement...

END_OF_DOCUMENT_TOKEN_TO_BE_REPLACED

How Can You Improve Lighting when Working from Home

This seems like the longest staycation of our lives, spent within the confines of our home. The pandemic has forced many of us into cre...

END_OF_DOCUMENT_TOKEN_TO_BE_REPLACED

All You Need to Know About Appliance Light Bulbs

Sometimes you don’t notice the things you had around you all along until they’re gone. Avoid this happening with your appliance lights ...

END_OF_DOCUMENT_TOKEN_TO_BE_REPLACED

Lighting can be complicated, but our friendly, experienced team makes it hassle-free. Need help? Just contact us via live chat, email, phone. We'll find the perfect bulb for you.

We offer the most competitive prices out there but to go the extra mile, we dispatch most our orders on the same day and it's free over £40.00!