How Do LED Filament Bulbs Work?

LED filament light bulbs, which are built to look like traditional carbon filament or Edison light bulbs, have captured the attention of many people seeking a unique and stylish look for their exposed bulb pendants and lamps. These replica bulbs offer the same classic look of a traditional filament bulb, but provide greater energy savings.

How exactly do LED filament bulbs manage to recreate the look of an incandescent filament using a light emitting diode, and how does it work? First, we need to look at what exactly LEDs are.

Traditional incandescent bulbs create light by generating heat. Unlike other forms of light bulbs that rely on this incandescent heat or a ballast to provide illumination, LEDs have “light emitting diodes” that create only light. This is what makes them so energy-efficient—they’re not wasting energy producing heat in addition to light:

All diodes emit photons (particles of electromagnetic energy), but only certain types of diodes emit that electromagnetic energy as light instead of heat. A light emitting diode is a type of solid-state lighting (SSL) technology, meaning that it emits light from a piece of solid matter. In this case, that piece of solid matter is a two-lead semiconductor.The Ultimate Guide to LEDs: What is an LED and how does it work?

What are Carbon Filament Bulbs?

Incandescent light bulbs have been around for a long time. In standard incandescent bulbs, carbon or tungsten filaments heat up when they are connected to electricity—such as when you flick a light switch—until they are literally “incandescent” with heat and provide light.

In carbon filament or Edison bulbs, these filaments are simply shaped into curly twists, loops, criss-crosses, and lines, and are contained in uniquely shaped glass bulbs such as globe, tubular, pear, and standard: 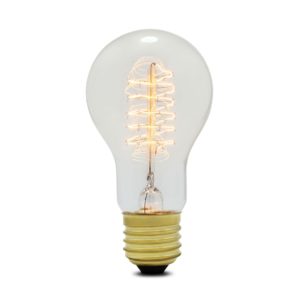 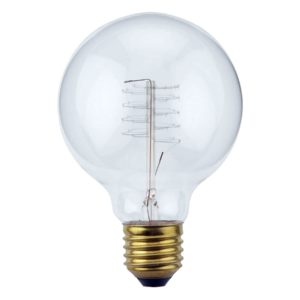 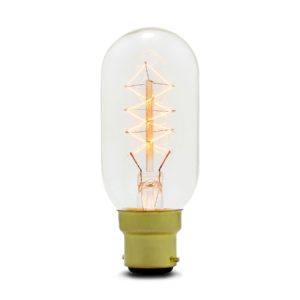 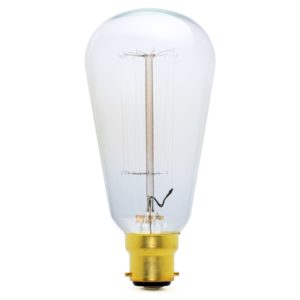 Their elegant appearance and warm light has made them incredibly popular in exposed-bulb lamps, such as pendants.

How do LED filament bulbs work?

Filament LED light bulbs do have an LED “filament”, but instead of heating it up to produce light, this metal strip is actually lined with light emitting diodes (LEDs). The metal strip and LEDs are covered, typically with glass or another transparent material, and then coated with a phosphor to turn the light emitted from the LEDs from blue into—typically—a warmer yellow tone, similar to incandescent filament bulbs. The LEDs strips are positioned facing outwards to reproduce the same 360° angle of light that incandescent bulbs have. When turned on, the entire strip appears illuminated rather than the individual diodes, creating a nice, even glow. 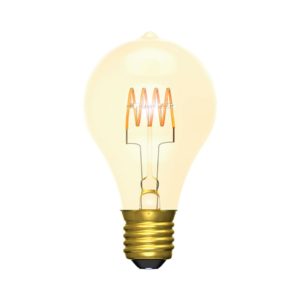 These LED filament strips are available in a number of shades that are designed to emulate the appearance of an incandescent light bulb filament, including many of the same filament patterns. While they are not as thin as the incandescent filament, they look very similar when illuminated. 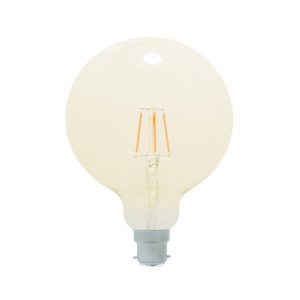 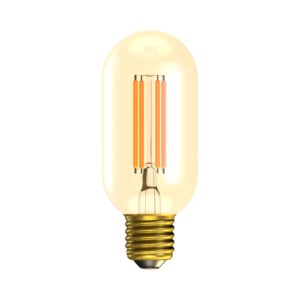 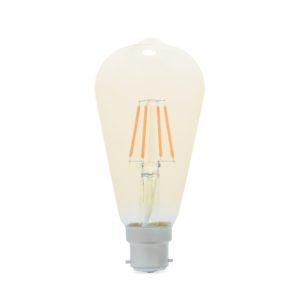 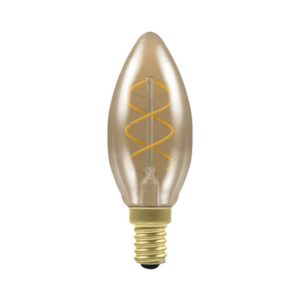 They are available in the same shapes and sizes as traditional filament bulbs, but thanks to the phosphor coating that changes the hue of the light given off, LED filaments are offered an even wider range of colours:

PRO TIP: LED filament bulbs generate less heat than traditional LEDs (which still emit significantly less heat than incandescent, halogen, or compact fluorescent bulbs) because their diodes are more spaced out. As a result, they dissipate heat more easily and often have even greater longevity than standard LEDs.

4 things to keep in mind when selecting LED filament bulbs

PRO TIP: Select bulbs with a higher lumen level and invest in a dimmer switch—this way you can easily adjust the lighting to suit any task or situation.

PRO TIP: Some LEDs will work with old dimmer switches, but they are more likely to encounter problems. This is because older switches are typically built using a type of dimming protocol called “mains dimming”, which was designed for the higher wattages required by incandescent light bulbs. Learn more about how to dim LED lights.

When installing dimmer switches, select only LED-compatible options to avoid any buzzing or flickering:

Learn more about what to look for when buying LEDs in our LED buying guide.

LED filaments recreate the look of traditional carbon filament light bulbs by lining up the diodes on a metal strip. This strip is then covered in glass and coated in phosphor to emulate the colour of an incandescent bulb. These metal strips can be shaped into the helices, curls, criss-crosses, and other configurations of carbon filament bulbs, providing you with the same look and ambience of an Edison bulb with all the energy savings of an LED.

END_OF_DOCUMENT_TOKEN_TO_BE_REPLACED

How To Get Started with Smart Lighting

Whether you were gifted a smart lighting setup over the holidays OR you are gifting it to yourself as part of your 2020 resolution to s...

END_OF_DOCUMENT_TOKEN_TO_BE_REPLACED

Whether you’re opening an office or store in an already-built space, are renovating an existing space to suit your new

END_OF_DOCUMENT_TOKEN_TO_BE_REPLACED

Is it Time for My Business to Upgrade to LED Lights?

When it comes to embracing new technology, businesses owners often feel hesitant to take the plunge and upgrade. Sometimes, there

END_OF_DOCUMENT_TOKEN_TO_BE_REPLACED

Are LED Lights Safe? Debunking the “Dangers” of LED Lights

LEDs have been on the forefront of lighting technology for some time now. As with all hot new products, there is bound to be some quest...

END_OF_DOCUMENT_TOKEN_TO_BE_REPLACED

We are always working to bring you the latest advancements in energy efficient lighting, so we’re excited to announce the

END_OF_DOCUMENT_TOKEN_TO_BE_REPLACED

Why Should My Business Make the Switch to LEDs?

LED lighting has been in the news and at the forefront of the lighting industry for some time now. You’ve

END_OF_DOCUMENT_TOKEN_TO_BE_REPLACED

How to Reduce Commercial Energy Consumption with Efficient Lighting

Operating a business is expensive, especially overhead expenses like rent, repairs, and utilities. Thankfully, there are ways to cut back.

END_OF_DOCUMENT_TOKEN_TO_BE_REPLACED

LEDs offer several advantages over traditional light bulbs, building on the best parts of their predecessors while leaving their inefficiencies

END_OF_DOCUMENT_TOKEN_TO_BE_REPLACED

Switching to LEDs in 5 Steps

Switching to LEDs is actually a fairly simple process. Most LED bulbs are compatible with your current fixtures and can